There are only 2 sexes:

Regarding our letter to the editor of JCEM expressing our concerns about the Madsen et al. study “Erythrocytosis in a Large Cohort of Trans Men Using Testosterone: A Long-Term Follow-Up Study on Prevalence, Determinants, and Exposure Years”.

We believe that the female reference range for hemoglobin and hematocrit must be used for trans males in order to help them to understand their true risks. Furthermore because of these risks and also lack of maturity, adolescent females with gender incongruence should never be prescribed testosterone. 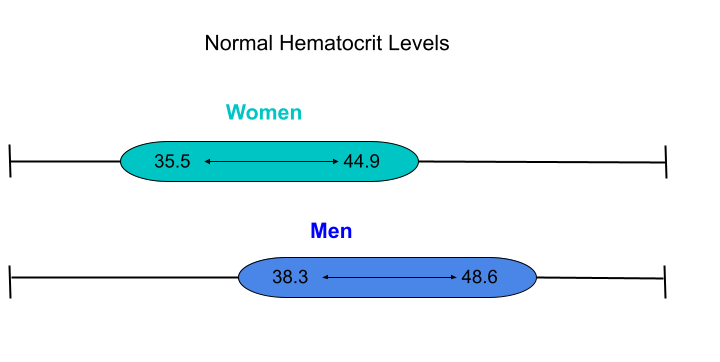 High testosterone levels can directly cause high levels of hematocrit.

Females who identify as trans males are given very high doses of testosterone to attempt to bring their testosterone levels into the male range.

For example, the normal adult female range of testosterone is 10 to 50 ng/dl. However, recommendations from Endocrine Society guidelines* are to bring these levels to the 300-1000 ng/dL range. This is 6 to 100 times above normal adult female testosterone levels. Naturally this has profound effects on the female body including driving up red blood cell counts to dangerously high levels. 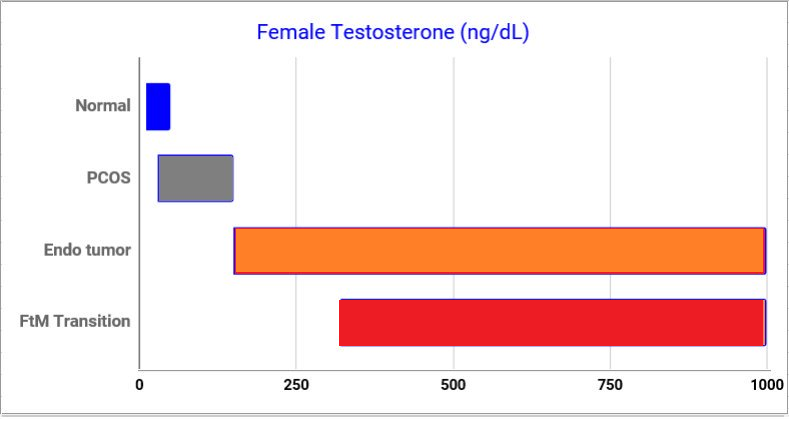 Having high red blood cell counts (erythrocytosis) puts females at increased risk of cardiovascular disease, coronary heart disease and death due to both as shown in the landmark Framingham Study.

Studies of trans males have already shown up to a nearly five fold increased risk of myocardial infarction compared to females not taking testosterone.

In the Framingham study, the younger female group (ages 35-64) at the highest range of hematocrit (above 45) had increased risk of cardiovascular disease, myocardial infarction and death due to both ***.

In the study we have critiqued, the authors use what is considered very high hemoglobin levels in males (greater than 50) for trans males (females). This is a difference of 5 whole units compared to the Framingham study (greater than 45). This difference leads to a dramatic undercount of the number of females who will likely be at increased risk of cardiovascular disease and death because of high red blood cell counts due to very high levels of testosterone. 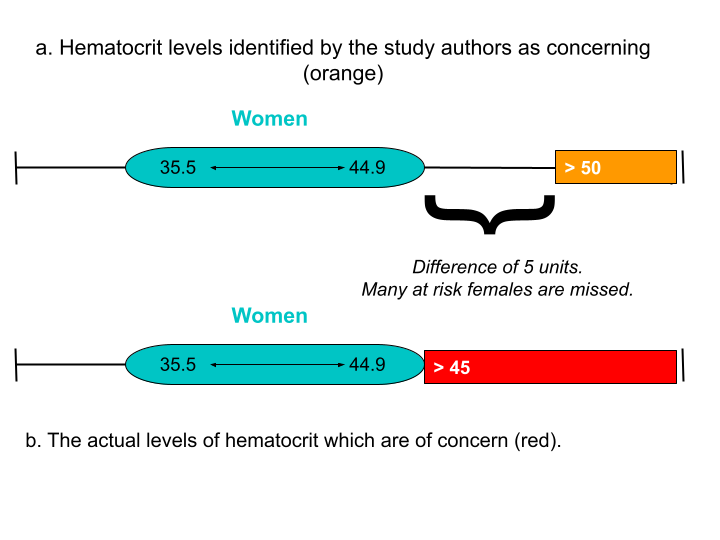 Fig 3. a. Shows the normal female reference range (turquoise) and the study authors range of concern (>50). b. Shows the normal female reference range and the levels which are actually concerning (red) for high red blood cells counts ( >45). The difference of 5 units means that a significant portion of women on testosterone and who have concerning erythrocytosis (high red blood cell counts) will be missed.

Physicians advocating for high levels of testosterone such as Stephen Rosenthal have argued that a person’s gender identity should determine these hormone levels.

In other words they believe that a metaphysical construct (gender identity) can somehow change physical reality and cause a woman to acquire male reference ranges for testosterone and other sex specific laboratory tests like hemoglobin. This of course is impossible.

We propose that the female reference range for hemoglobin and hematocrit be used for trans males so that both clinicians and patients can help more accurately assess risk factors for cardiovascular disease and death.

Adolescent females with gender incongruence are a special and unique category of persons because a) they have limited ability to provide informed consent to treatments b) they will be on high dose testosterone for a longer period of their lives c) the long term hazardous effects of testosterone when starting at this age are unknown and are likely to be worse, and d) they are more likely to have comorbid mental health disorders.

Furthermore, because of immature brain development, adolescents are prone to risk taking behavior. This includes the use of anabolic steroids, such as testosterone, which are also drugs of abuse. We believe that adolescents should not be given testosterone to treat gender incongruence under any circumstances because of these factors.

*The Endocrine Society Guidelines are not considered standard of care. This is made clear in the disclaimer section of the pdf of their guidelines on p. 3895. Also there is no grading of evidence (and therefore no evidence) for the testosterone recommendation.

**Will vary slightly depending on the laboratory.

***This was independent of other risk factors such as smoking, high blood pressure, poor glucose control, etc.